Discussing the Intersection of Retail and Robotics at NRF 2019

More than 38,000 attendees traveled from all over the world to discuss retail technology, strategy, and leadership at the NRF Big Show, hosted by the National Retail Federation. Technology was a main focus of this year’s show, both in presentations and throughout the exhibition hall. Retailers are excited to embrace technologies such as artificial intelligence, robotics, automation, and online marketplaces, to name a few.

As retail fulfillment continues to blur the lines between warehouses and retail stores, robots can play a key component in helping stores meet customer demands for online delivery, same-day pickup, and same-day delivery. Retailers are looking for ways to improve efficiencies while remaining sustainable and flexible. 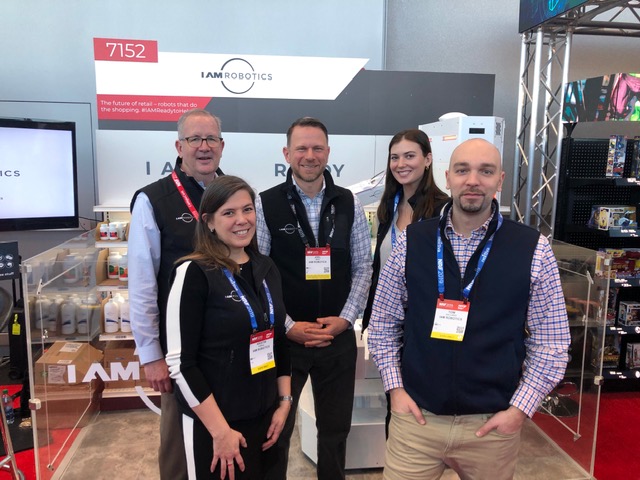 The IAM Robotics team had the opportunity to be part of NRF 2019’s Innovation Lab, an invitation-only exhibition of the top and upcoming retail technologies. At the show, we showcased our Swift autonomous piece-picking robot by creating an IAM Ready to Help interactive store, which allowed attendees to select an item of their choice for our robot named Madison to pick from our shelves. 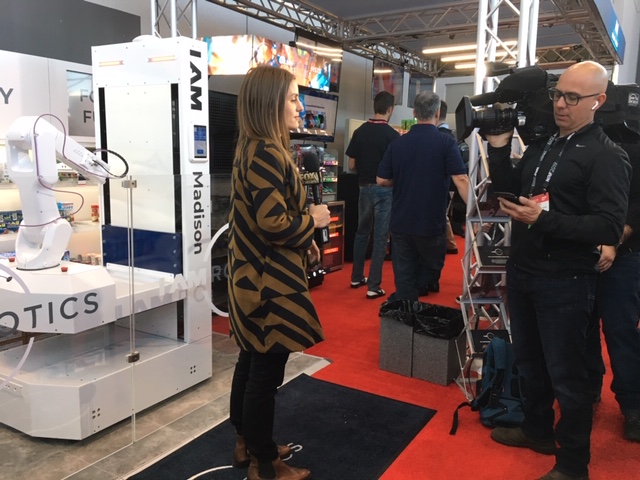 Madison was quite the hit among media outlets and show attendees! Fox Business News stopped by our booth to see Madison in action, License Global also noted that robotics was a popular draw in the Innovation Lab, Market Scale deemed IAM Robotics as a standout in the innovation exhibition, and Social Magnets founder Ross Quintana included an IAM Robotics tweet in his Best Of NRF 2019 list.

On the first day of the show, IAM Robotics CEO Joel Reed was interviewed on Periscope by Vala Afshar, Salesforce Chief Digital Evangelist, about the future of robotics and retail fulfillment:

Attendees from all around the world were also excited to capture the Swift picking robot in action.

Our team is live from #NRF2019 today, currently checking out the exhibit from @IAMRobotics. The future of #Retailtech looks bright. pic.twitter.com/EUOLCEXC0c

Autonomous robots like Swift can pick items at any time of the day, providing workers with more time to focus on more customer-facing initiatives.

Looking to learn how robotics can help manage the industry shift in how items are fulfilled? The IAM Robotics solution can help retailers lower their costs and improve operational efficiency.

This website uses cookies to improve your experience while you navigate through the website. Out of these, the cookies that are categorized as necessary are stored on your browser as they are essential for the working of basic functionalities of the website. We also use third-party cookies that help us analyze and understand how you use this website. These cookies will be stored in your browser only with your consent. You also have the option to opt-out of these cookies. But opting out of some of these cookies may affect your browsing experience.
Necessary Always Enabled
Necessary cookies are absolutely essential for the website to function properly. These cookies ensure basic functionalities and security features of the website, anonymously.
Functional
Functional cookies help to perform certain functionalities like sharing the content of the website on social media platforms, collect feedbacks, and other third-party features.
Performance
Performance cookies are used to understand and analyze the key performance indexes of the website which helps in delivering a better user experience for the visitors.
Analytics
Analytical cookies are used to understand how visitors interact with the website. These cookies help provide information on metrics the number of visitors, bounce rate, traffic source, etc.
Advertisement
Advertisement cookies are used to provide visitors with relevant ads and marketing campaigns. These cookies track visitors across websites and collect information to provide customized ads.
Others
Other uncategorized cookies are those that are being analyzed and have not been classified into a category as yet.
SAVE & ACCEPT