Showcasing the Future of Shopping and Robotics at CES 2019

This year’s CES 2019 technology extravaganza provides an opportunity for the world to see the latest innovations in technology in front of an anticipated audience of more than 180,000 attendees from more than 150 countries.

The showcase is a stage where many world-changing products have launched, such as the VCR, 3-D printing, driverless cars, and 4K virtual reality, among others. It’s also a place to see some of the world’s craziest technology—from rolled-up 8K televisions to headsets for meditation and sleep to a vegan burger patty that is heralded as “a triumph of food engineering.”

Robotics and machine intelligence were key topics discussed at the conference, as automation technology is expected to create 58 million net new jobs by 2022. Not only can robots handle jobs that are less desired by human workers, but introducing them into the retail environment allows workers to focus on more complex, customer-facing tasks.

The Elvis #robot from I AM Robotics is designed to be a personal shopper for consumers at the store level. Tell it what you want and it can roam the shelves and collect it all for you. Is this something that you would find useful? #CES2019 pic.twitter.com/Qh6tpjfcZf

Our IAM Robotics team traveled to Las Vegas with the world’s first mobile piece-picking robot, Elvis, to reveal how robotics is changing the shopping environment. 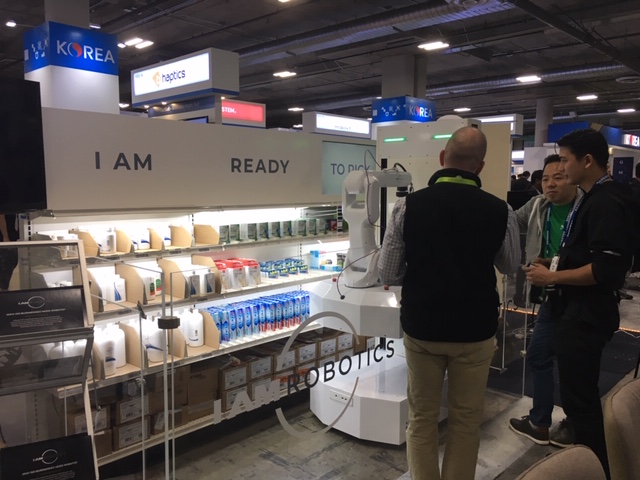 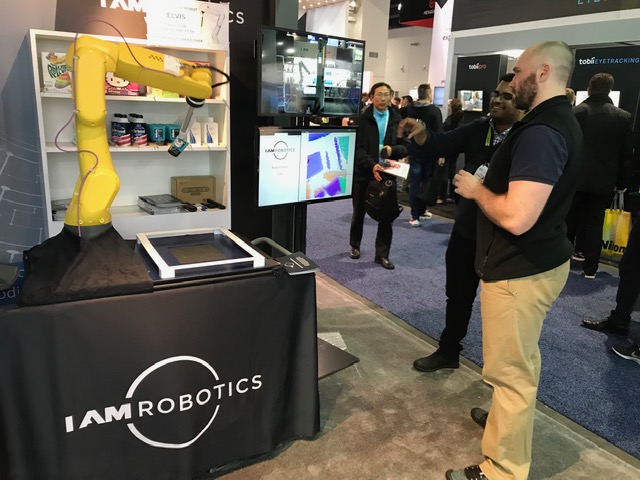 At CES, we had the opportunity be part of the Plug and Play booth as one of the many exciting startups that Plug and Play, a global innovation platform, has supported. Elvis had room to show off his skills by picking items from shelves that attendees selected. In addition, our partners at Orbbec demonstrated the 3-D vision that they worked on with us to create how the robotic arm of Elvis identifies products.

Our robots are at two booths at #CES2019 – the @PlugandPlayTC booth 53122 and the @Orbbec booth 21416. Check out the world’s first mobile piece-picking robot and learn how #robotics can help fulfill e-commerce orders. pic.twitter.com/6DmOwr9cOd

The growing popularity of e-commerce means that consumers will be expecting more same-day pickup and delivery services by retailers. Grocery stores will also be expected to keep up with consumer demand; online grocery shopping is predicted to grow to 20 percent of total grocery retail sales, totaling an astounding $100 billion.

At CES 2019, we created our IAM Ready to Help store to show exactly how robots can help fulfill these types of orders, whether in retail or grocery. Visitors to our booth were able to select an item of their choice, and Elvis would pick it out for them. One attendee claimed excitedly, “This is so cool! I can’t wait to be able to shop like this.”

Elvis (our robot) is in the building at #CES2019! Stop by the Plug and Play booth 53122 in Eureka Park to see Elvis in action and discuss how #robotics will impact the shopping environment. #IAMReadytoHelp pic.twitter.com/9ugF1QMvGN

Having an autonomous robot take care of the monotonous job of picking items allows workers to be more productive with their time, creating opportunities for stores to improve their business in other ways.

Interested in discussing how robots can help businesses prepare for increasing demands for faster delivery? The IAM Robotics solution helps retailers elevate their offerings to create a new shopping experience.

This website uses cookies to improve your experience while you navigate through the website. Out of these, the cookies that are categorized as necessary are stored on your browser as they are essential for the working of basic functionalities of the website. We also use third-party cookies that help us analyze and understand how you use this website. These cookies will be stored in your browser only with your consent. You also have the option to opt-out of these cookies. But opting out of some of these cookies may affect your browsing experience.
Necessary Always Enabled
Necessary cookies are absolutely essential for the website to function properly. These cookies ensure basic functionalities and security features of the website, anonymously.
Functional
Functional cookies help to perform certain functionalities like sharing the content of the website on social media platforms, collect feedbacks, and other third-party features.
Performance
Performance cookies are used to understand and analyze the key performance indexes of the website which helps in delivering a better user experience for the visitors.
Analytics
Analytical cookies are used to understand how visitors interact with the website. These cookies help provide information on metrics the number of visitors, bounce rate, traffic source, etc.
Advertisement
Advertisement cookies are used to provide visitors with relevant ads and marketing campaigns. These cookies track visitors across websites and collect information to provide customized ads.
Others
Other uncategorized cookies are those that are being analyzed and have not been classified into a category as yet.
SAVE & ACCEPT